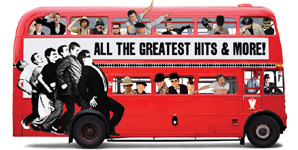 The sight of Suggs dressed as a giant ice cube while eating fish fingers with children can sometimes cause you to forget what a great front man he once was. Those Captain Birdseye adverts were criminal, not just because they put the captain out of a job but because of the way in which they tarnished the image of Madness, one of the great British pop acts of modern times. So it's fitting that this best of album (released to coincide with their UK tour and also on the back of top 10 album The Liberty of Norton Folgate) should pop up to remind us what a great singles band they once were.

Total Madness tells the Madness story in the form of 23 tracks, from charming first single The Prince all the way through to recent track NW5. On the course of the journey you're reminded of just how many smash hit singles the band have had. As well as the happy-go-lucky charm and quality of One Step Beyond, Baggy Trousers, House of Fun and Driving in my car, Total Madness also recalls the downbeat excellence of My girl, Embarrassment and Grey day. Much maligned single Michael Caine also pops up for good measure as does hit single Wings of a dove with its thumping beats and uplifting Steele drums.

There have been many Madness compilations over the years, too many to mention in fact but with a resurgence of interest after Norton Folgates rise to #5 it's not too surprising to see another hit the shelves. Having said that, for those that don't already own a Madness album, this could be the perfect introduction to their music. Showcasing a host of singles that reached the top ten as well as some that didn't, Total Madness as well as the bands performance at Glastonbury helps one of Britains most important pop groups be remembered in the way they should be.

Madness - The Liberty of Norton Folgate