Madonna's birthday took place on 16th August, with her turning 50-years-old in 2008. In celebration, here are 50 facts and bits of trivia about the singer: 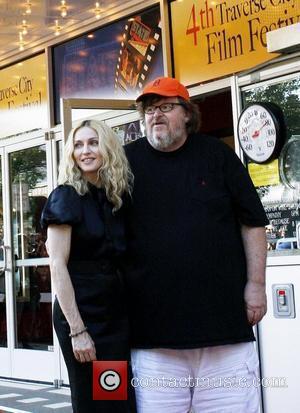 Picture: Madonna and Michael Moore Premiere of 'I am because we are' held at the State Theatre Traverse city film festival Detroit, Michigan - 02.08.08

1. Madonna has appeared in 22 movies.

3. In 1986, Madonna made her theatrical debut alongside her husband Sean Penn in 'Goose + Tom Tom', as well as appearing with him onscreen in 'Shanghai Surprise' in the same year.

4. Wine, with five varieties from Pinot Grigio to Chardonnay, ranging from around 25 to 50 USD per bottle.

6. Madonna has five siblings, and is the daughter of Silvio Ciccone and Madonna Louise Fortin.

8. Madonna's father had two children before marrying her mother, giving her a stepbrother and stepsister.

9. Madonna's album, 'Like a Virgin', was voted by the Rock & Roll Hall of Fame to be one of the Definitive 200 Albums of All Time, before Madonna herself was inducted into the Hall of Fame in 2008.

10. Madonna is also the inspiration for Celebrity Cellars' collectible wine 'Madonna - Confessions of a Dance Floor'.

12. Sting is the godfather to Rocco - the song of Madonna and Guy Ritchie.

14. Since moving to the UK, Madonna has become the most successful female artist in the country with more number one singles than any female UK solo artist.

15. Madonna has had a species of tardigrade (waterbear) named after her.

16. Madonna's father, Tony Ciccone, owns a wine business and has named a new brand of Madonna

18. Madonna has written 10 books of children's literature, with 'The English Roses' being published in 2003.

19. When the UK Music Hall of fame began in 2004, Madonna was among the inaugural inductees along with Elvis, Bob Marley, U2 and The Beatles.

23. Madonna was approached about having a star on the Hollywood Walk of Fame in 1990, but showed no interest.

24. While at Rochester Adams High School, Madonna was a cheerleader.

25. Madonna was paid 5 million USD for a Pepsi commercial, even though it never aired because of its controversial religious overtones.

26. Madonna is friends with Sting and his wife Trudie Styler - the latter introduced her to current husband Guy Ritchie.

27. Madonna has a condition called brontophobia, which is a fear of thunder.

28. Before Michelle Pfeiffer was cast, Madonna was considered for the role of Catwoman in 1992's 'Batman Returns'.

31. Madonna originally auditioned for a part in 'The Bodyguard' before Whitney Houston landed the role.

34. Madonna originally wanted to be a ballet dancer.

35. Madonna's first solo tour was supported by The Beastie Boys.

37. Madonna was offered the leading role in both 'Showgirls' and 'The Fabulous Baker Boys' but turned down the roles.

39. Madonna has won 5 of the 18 Grammy Awards that she has been nominated for.

40. Madonna has been a vegetarian since the age of 15.

42. Madonna's 1992 book 'Sex' featured naked pictures of the star, and was so popular it completely sold out in 48 hours and required a re-print.

43. Madonna's album 'True Blood' was entirely dedicated to Sean Penn, her husband at the time.

44. Madonna's wedding in 2000 included Gwyneth Paltrow as her Maid of Honour.

45. Four of Madonna's music videos were directed by David Fincher.

46. MTV banned the videos for 'What it Feels Like For a Girl' and 'Justify My Love'.

47. Madonna was born in Bay City, Michigan, with her grandparents coming from Pacentro, Italy. Pacentro build a 13-foot statue of Madonna in 1988.