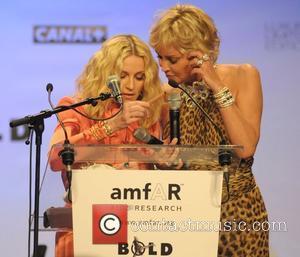 Picture: Madonna and host Sharon Stone Madonna auctioned one of her diamond encrusted handbags including its contents, which sold for $472,000 amfAR's annual Cinema Against AIDS...

Madonna's 11th studio album  and her last with Warner Bros  will be named Licorice, stateside reports have said.

Two of the Queen of Pop's new tracks also got an airing; Candy Shop and the Kanye West-featuring The Beat Goes On.

According to fan websites, Justin Timberlake, Timbaland and Pharrell Williams all guest on the new CD.

OutQ also claimed that Licorice, understood to have been presented to Warner Bros bosses this week, will include a reworked version of The Devil Wouldn't Recognise You.

Licorice is set to be Madonna's last studio album with Warner Bros, not withstanding a new greatest hits collection, before she begins her ten-year contract with Artist Nation.

The groundbreaking deal encompasses the entire Madonna brand, from music and tours to DVDs and official merchandise.