Madonna kicked off her world tour in Israel last night (31.05.12), with a spectacular show at Tel Aviv's Ramat Gan Stadium 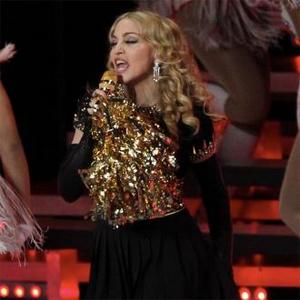 The 53-year-old singer launched her 'MDNA' concert series with a spectacular show at Tel Aviv's Ramat Gan Stadium, where she wished peace on The Middle East.

She told the cheering crowds: ''I chose to start my world tour in Israel for a very specific and important reason. As you know, the Middle East and all the conflicts that have been occurring here for thousands of years - they have to stop.''

During the concert, Madonna also took a swipe at Lady GaGa, who was accused of copying her song 'Express Yourself' for her recent hit 'Born This Way'.

At the end of a performance of 'Express Yourself', which she had reworked to include a sampling of 'Born This Way', Madonna yelled: ''She's not me!''

Throughout the show, Madonna mixed hit songs over the past three decades with tunes from her latest album, 'MDNA'.

She opened the show with 'Girls Gone Wild', whole 'Gang Bang', 'Vogue' and 'Like A Virgin' were all went down well with the crowds.