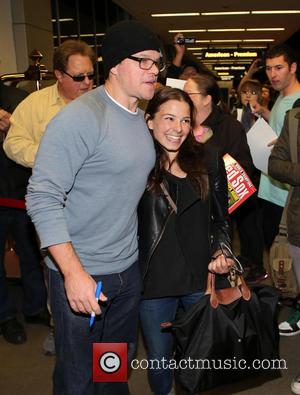 Matt Damon exacted revenge on his rival Jimmy Kimmel last night by tying the chat show host to a chair and gagging him whilst he took over the show and invited his celebrity pals, like Ben Affleck, Andy Garcia and Demi Moore onto the show. What’s the root of this apparent beef between Kimmel and Damon? You might think that it’s because Kimmel closes every show by saying “apologies to Matt Damon, we ran out of time.” The Good Will Hunting actor had another explanation though. He explained that Kimmel was jealous of his acting career and had auditioned for EVERY role that Damon had landed.

“Jimmy always wanted to be an actor," Damon told the audience, "and, unfortunately for him, I beat him out for every role he ever truly wanted. Jimmy has auditioned for every movie I've ever been in, every single one of them. How many did he get? None. So, he hates me.” This was followed by some hilarious footage of Kimmel auditioning for roles in The Bourne Ultimatum, Good Will Hunting and The Adjustment Bureau.

Last night’s episode of Jimmy Kimmel Live (or Jimmy Kimmel Sucks, as Damon referred to the show) was a real break from the norm and included the best intro to a late night chat show that we’ve heard in a log time, as Damon addressed the audience by saying “Just for starters, let me ask you guys this: As an audience, is it weird to see a person with actual talent host this show? I've been waiting for this moment for a long, long time. This is like the time I lost my virginity, except this is going to last way longer than one second." The feud may not be a serious one, but this was seriously funny.