Review of Beyond Magnetic Album by Metallica

Metallica's new EP Beyond Magnetic is a somewhat belated follow up to their last studio record Death Magnetic. Released initially as a download (without a hint of irony), it's finally getting a physical release some 3 and a half years after the sessions that spawned these 4 songs. The vaults were opened to celebrate the band's 30th anniversary shows, however you can't help but feel it's also very convenient timing. Their much-maligned collaboration with Lou Reed last autumn was certainly viewed with some contempt by the core Metallica audience. In fairness Lulu did feature some musical moments that were as interesting as anything Hetfield and co have recorded in the last decade, but Beyond Magnetic is no doubt a musical palette cleanser ahead of a new studio album this year. 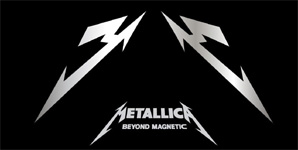 The prospect of 4 songs that didn't make the cut for Death Magnetic may not seem like an appealing prospect, but Beyond Magnetic is obviously a perfect companion piece to that record. It's the point where producer Rick Rubin brought the band back from the wilderness. He made Lars' drum sound less industrial, thereby reinstating him as the best metal drummer of his generation. Solos and speed were no longer frowned upon and instead they were embraced once more. It's pleasing to report then that Beyond Magnetic is 'proper' Metallica, and is also rather good considering that these are essentially rough mixes that didn't get a final studio polish.

'Hate Train' introduces itself with a frenetic whirlwind of guitar and drums that sounds as if the band are preparing for some kind of epic battle. Even Hetfield's vocal sounds confrontational as he growls before uttering a single word. While the pace mellows somewhat midway through it ramps up again sounding like a bastardised cousin of ReLoad's 'Fuel'. Kirk Hammett even has an opportunity to capture the essence of classic Metallica, as he furiously jams out some extended solos during the 7-minute runtime.

The highlight here is 'Hell and Back' which alternates between the more sedate grooves found on albums like Load and the crunching guitars of Master of Puppets. If the Death Magnetic sessions were an exercise in rediscovering their roots, this song surely is the best example of how to learn lessons from what has come before.

Beyond Magnetic does make you wonder why these songs weren't included on the album in the first place, as they're much better than most other studio offcuts that bands reject. However the reason could be that they were so indebted to Metallica's past successes, they may have been seen as a backwards step at the time. Whatever the case may be, this peek behind the curtain does provide a timely reminder that Rick Rubin knows how to get Metallica to perform well in the studio. With a new album in the works for their 31st year Beyond Magnetic is certainly a welcome, if minor addition to their back catalogue.