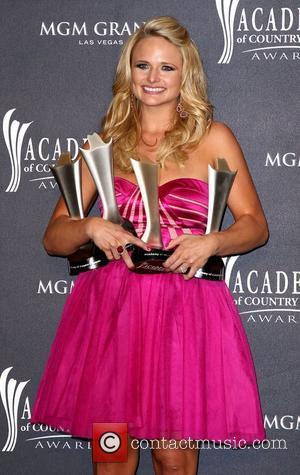 Miranda Lambert's wedding pictures are set to be published in the forthcoming issue of US Weekly Magazine. Miranda Lambert, the acclaimed American country singer, married musician Blake Shelton during an intimate ceremony in Texas over the weekend.
The couple tied the knot on Saturday evening (14th May 2011) in front of 550 family members and friends at the Don Strange Ranch in Boerne, Texas, north of San Antonio. Speaking after the ceremony, Lambert said, "I'm married to my best friend! Looking forward to a lifetime of laughter". Shelton echoed his wife's words, saying, "I wanted to be married to Miranda the day I proposed. Finally, it's official!" Although the wedding pictures aren't scheduled to be published till later this week, official photographer Robert Evans has been speaking on his blog about the couple's special day. The photographer described the weather as being "perfect" and the environment "beautiful" but noted, "The most special part of this day was the bride and groom, not because they are two of the biggest county music artists in country music today, no what made this day so special, was how real Miranda Lambert & Blake Shelton really are". Evans revealed that the couple posed for pictures before the nuptials so that they were free to do whatever they wanted after the ceremony, adding, "A wedding is a celebration and when the months of planning are over, It's time to Play!".
Miranda Lambert's official wedding photographs will be published in Thursday's edition of US Weekly Magazine (19th May 2011).

Apologies to Adam and all his fans! This was obviously a HUGE error which we've now amended. But don't you think Miranda and Adam would make a slightly odd yet lovely couple!? - Ed