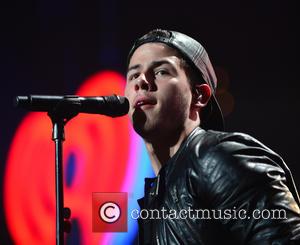 Picture: Nick Jonas - Photographs of a host of pop stars as they gave live performances at the Y100 Jingle Ball 2014 which was held at...

Pop star Nick Jonas has revealed he'd marry his brother Joe's ex, Demi Lovato, if he had to choose between her, Miley Cyrus and Selena Gomez.

The former Jonas Brothers star, who is currently dating beauty queen Olivia Culpo, signed up to play the Lips, Wife, Leave game during an appearance on U.K. radio station Capital Fm before he realised the three ladies he had to choose to romance, wed or dump were pop superstars Lovato, Cyrus and Gomez.

Choosing carefully, he said, "Demi, obviously... wife, because we're, like, brother and sister and friends. I'd prefer to spend my life with her, as opposed to the others."

Then, turning to Justin Bieber's ex Gomez and Cyrus, he added, "I dated both of them at some point in time, which makes this a little more uncomfortable."

He eventually picked Gomez to kiss, but diplomatically added, "I've got love for Miley. She's great."