Olly Murs Signs A Fans Breast, Looks for A Girlfriend 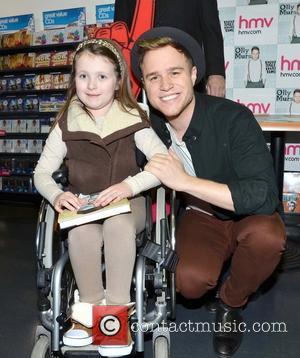 Living up to his reputation as a cheeky chappy, Olly Murs has employed the age old tactic of signing a young fans breast. We're not sure why people insist on getting parts of their body signed. You wash, right?

Anway, all this boob-signing begs the question; why hasn't Murs got a girlfriend yet? Do people find him just too annoying to be with for more than 5 minutes? "I went on a couple of dates with a girl that went really well. But I'm still single as it's just that time of year when I'm really busy," is his excuse, as he explains his single status to The Sun. "We'll see what happens over Christmas. It's hard -- but I'm just really busy through work." Olly's relationship with Caroline Flack was considered by some to be romantic, but he dismissed that, saying that the pair were just friends. "We've never had any connection like that," he said, adding: "We're just really good mates. She's a lovely girl to be around and she's just brilliant. The only thing I worried about was that it was going to affect our relationship on camera."

Despite being unattached, Olly's doing well for himself. He nabbed the U.K number 1 this week with Troublemaker, and he's off to support Robbie Williams on a European stadium tour in 2013.