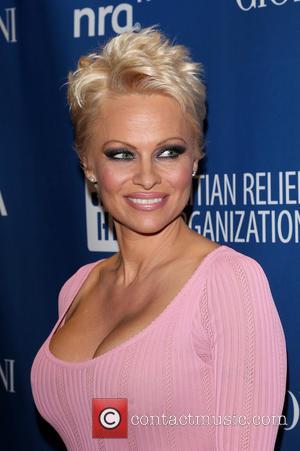 The 'Baywatch' star confirmed the news at Sean Penn's Help Haiti Gala at the Montage Hotel in Beverly Hills this past Saturday (Jan 11th).

Anderson displayed her huge diamond wedding ring while at the star-studded event and spoke to E!News about the new marriage.

When asked by the gossip site if her and movie producer Salomon were, for the second time, husband and wife, the 46 year-old said, "yes."

"We're very happy," she continued. "Our families are very happy and that's all that matters."

The first time around, the pair tied the knot in Las Vegas in October 2007 and were separated only two months after.

By February of 2008 Anderson had requested though the courts that their marriage should be annulled, claiming 'fraud' as the reason.

This past October, while on 'The Ellen Degeneres Show', the 'Scary Movie' actress had hinted she reconciled with Salomon, the host asked about their relationship status after they were spotted on vacation together in the south of France in that same month.

"I say we're best friends.with benefits," the mother-of-two said, adding that she didn't "want to meet anyone else."

"You keep going back to the same guys," DeGeneres jokingly responded. "You're married, then you go back."

Pamela has been married before to the Grammy nominated singer Kid Rock and Motley Crew drummer Tommy Lee with who she has two sons with, Brandon Thomas Lee and Dylan Jagger Lee.