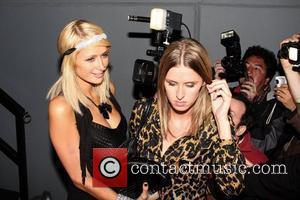 Paris Hilton's break-up with Doug Reinhardt was a messy affair - the hotel heiress reportedly pelted ice and fruit at a girl she found flirting with her lover just hours before dumping him.
Hilton and The Hills star began dating last year (08), and despite announcing that he was her "future husband", the socialite publicly dumped Reinhardt through her publicist on Wednesday (10Jun09).
And the hotel heiress made sure their break-up was one to remember - she stormed into Los Angeles' Darkroom bar on Tuesday night (09Jun09) and attacked beauty queen Kendhal Beal with snacks, according to the New York Post's PageSix.
A representative for Beal tells the publication, "Kendhal and a friend of hers ended up at Darkroom, where Doug and Brody Jenner were hanging out.
"Kendhal knows Brody and Doug, and so they were talking and catching up. They all took a shot and were watching the Lakers game. But Paris got word that Doug was at the bar, and she showed up and started going at it.
"Paris was picking up ice and fruit and throwing it at Kendhal - she was the victim. Kendhal did nothing offensive or aggressive. Paris was throwing accusations, calling her names. It was the same thing you always hear about Paris and her tirades."