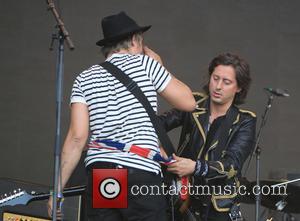 The rockers were added to the first-day line-up at the last minute after Florence + the MAChine were bumped up to headliners when Foo Fighters pulled the plug on their set to allow frontman Dave Grohl to recover from a broken leg he sustained during a recent show in Sweden.

The group's triumphant set began with versions of fan favourites The Delaney and Vertigo, and Doherty took a moment before the band played Time For Heroes to honour his late friend.

Wass died after suffering a heart attack earlier this year (15).

The Libertines weren't the only day one 'surprise' for Glastonbury revellers - The Charlatans and Bastille also performed low-key sets.