Robbie Williams' is taking his latest album 'Take The Crown' more seriously than any of his recent efforts, despite its ''obnoxious'' title. 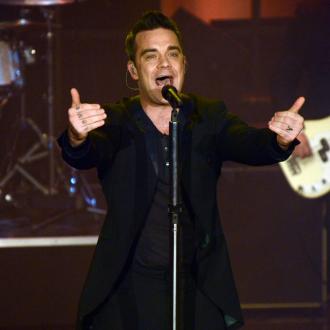 Robbie Williams admits his latest album has an ''obnoxious title''.

The 'Candy' singer unveiled his ninth studio offering 'Take The Crown' last month, and he admits he wants people to take this record as seriously as he does.

He said: ''It's an obnoxious title. I started out obnoxious and I plan to carry that out. 'Take The Crown' means I'm serious this time, I'm going on tour and what-not.''

Among the people he worked with on the album was Take That bandmate Gary Barlow, and he admits they did a lot of songs which will turn up on ''various'' projects, even though he admits to feeling pressure to compete with his pal.

He said: ''In the papers it was like, 'Gary Barlow has outsold Robbie Williams six to one with his tour, phenomenal change in fortune...' I was like, 'Oh God.'

''Gary, I highly, highly respect him. Isn't he the soundest guy? He's a lovely man and he's the first port of call for advice. He's a very, very wise man. He's very much dad.