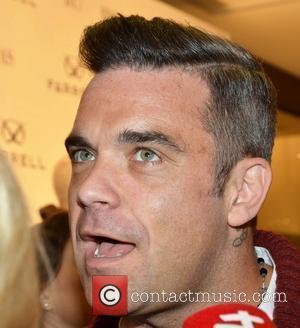 Robbie Williams baby girl has arrived safe and sound into the world, with attention on Wednesday turning to the Take That man and wife Ayda Field’s choice of name. Would it match Williams’ personality? Would the couple play it safe? Well, it’s a yes to both, kind of.

The 38-year-old singer took to his blog today to disclose that his baby girl would be named Theodora Rose Williams. Not the world’s most common name, though it’s certainly nothing to rival the more bizarre celebrity baby names of years gone by (Apple, anyone?) However, it seems that Robbie has given his first daughter a little nickname, telling fans that she will be “affectionately known as Teddy,” while adding, “Born 3.33pm on 18.9.12, 7Ibs 4OZ…Baby, Mummy and Daddy are all rockin.... Thank you for your best wishes XXXX.” Robbie had expressed concerns last week that he may miss the London birth of his child while touring other parts of the UK, though he did have a private jet on standby. Of course he did.

Williams and wife Ayda have already confirmed their daughter will grow up as a British citizen, despite the singer owning a home in Los Angeles and spending the majority of his time there over the past couple of years.