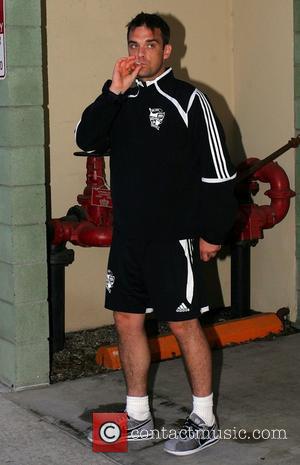 Picture: Robbie Williams at the last game of the season for his soccer team LA Vale Los Angeles, California - 28.07.07

British popstar Robbie Williams has cancelled writing sessions with his long-time lyrical partner Guy Ritchie after it emerged that Guy has been working with Robbie's former band mates.

Chambers, who was behind some of Robbie's biggest hits including ANGELS, had recently reunited with the singer after going their separate ways several years ago.

However, the Sun reports that the pair's scheduled Los Angeles song-writing sessions have been cancelled after they "didn't work out".

A source claims Guy's upcoming collaboration with Take That members GARY BARLOW and Mark Owen was the real problem, added the newspaper.

"He never mentioned it to Robbie. Rob heard Gary was in LA working and found out it was with Guy. He wasn't best pleased when he heard," continued the source.

Chambers, Owen and Barlow are thought to be part of a 12-strong writing team for a new ITV show BRITANNIA HIGH which follows the lives of youngsters at a fictional performing arts school.

Barlow will pen songs for the students to sing throughout the series.