Russell Crowe Staged Marathon Nine-hour Auditions To Make Sure He Had The Best Cast For His Directorial Debut, Because He Didn't Want Slackers Who Weren't Up For A Challenge. 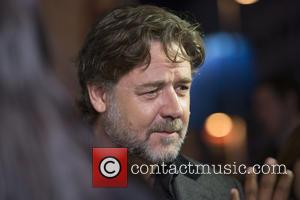 Picture: Russell Crowe - Shots of a variety of stars as they arrived to the Madrid premiere of Russel Crowes latest film 'The Water Diviner' in...

Crowe stepped behind the camera for the first time to take charge of period film The Water Diviner and made sure he had the best people around them by testing their stamina before he even gave them roles in the film.

He tells WENN, "I tested them (actors) on many different levels; intellectually, emotionally but also looking for who is still contributing, because, when you're filming the days are long. So the guy who gives up after five hours of the audition; you don't want that guy. You need the guy who is still going to be present in the 12th hour and still thinking and coming up with an idea."

And the cast members' tough introduction to life with director Crowe didn't end there - he turned his farm in Australia into a bootcamp to get his cast ready for filming : "It was about three months, before we started. I put them through this quite extensive, torturous experience.

"They were getting up early in the morning and they might do yoga, they might go on a long walk or a weights session. Then they'll go and ride horses for a number of hours to get that skill set under their belt, or lessons with weaponry to get that skill. Then you might take them on a 50 kilometre bike ride. You might put some arrows in their hand and say, 'If you don't hit the bullseye you don't get dinner tonight!'

"You put them in a pressurised situation and, at night time, you have lectures about geopolitics, about the history of the Ottoman empire. You fill their hearts and minds with the things that you want them to know about. All you're asking for then is that they take the knowledge that you crammed into them in 10 days and if they're just consistent then they'll bring themselves to the point of their first shooting day and have a mile of depth behind their eyes because they know the character they're playing, they know the situation they're in, the history of the times, they have the skills on board and it shows right here.

"So you can see I've taken a group of urbanised surfer dudes and taken them back 100 years."