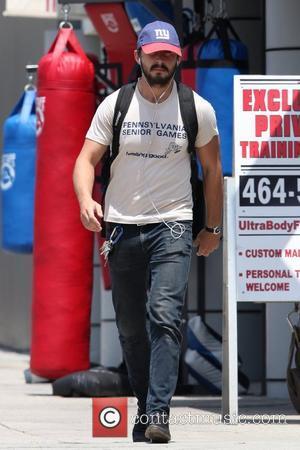 Actor Shia LaBeouf's publicist is playing down reports suggesting the actor became unruly at a party in Los Angeles on Friday night (26Aug11), insisting the Transformers star's exit from the bash has been "misinterpreted".
Guests told Life & Style magazine that the actor spat water over his date and rocker Marilyn Manson, who was also at the event at The Box nightclub, and that he appeared to be having "a public meltdown".
But LaBeouf's representative Melissa Kates insists there was no incident and the whole thing has been taken out of proportion.
She tells WENN, "Shia actually left early... He went to see one of the bands performing in the showcase and left after they finished.
"Exiting through a crowded room was apparently misinterpreted. No altercation occurred."
Onlookers had told Life & Style that LaBeouf "lunged through the very thick seated crowd, and the crowd pleaded with him and encouraged him to sit down".
One audience member told the publication, "Shia had to climb over people and tear himself out of the grasp of various strangers who were trying to keep him from going crazy. His date panicked and ran out after him.
"It was so insane. He just had a total meltdown right in front of everyone. It was completely out of control. He was so angry and physical. He was determined to get out of there."