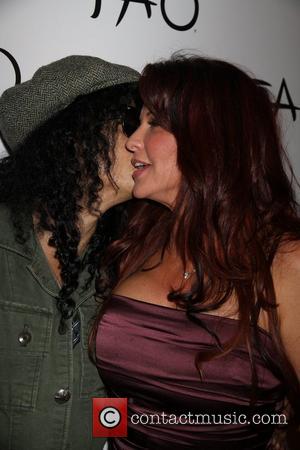 Picture: Slash and Pearla Slash hosts his concert after party at Tao nightclub inside The Venetian Resort and Casino Las Vegas, Nevada - 27.01.11

Slash's wife has been accused of assaulting a woman backstage at an Ozzy Osbourne concert in Los Angeles this week (beg31Jan11).
The guitar legend opened for Osbourne at the L.A. show, and after the former Guns N' Roses star performed, an argument is said to have kicked off backstage between his wife, Perla, and an unnamed female.
Perla allegedly kicked the woman in the stomach when she spotted her talking to her husband, according to TMZ.com.
The website reports the alleged victim refused medical attention, but later filed a police report naming Perla as her attacker.
An investigation is said to have been launched, but no charges have been filed.