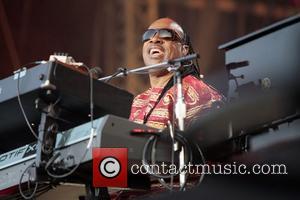 Stevie Wonder used his headlining slot at London's Hard Rock Calling on Saturday night (26Jun10) to pay tribute to the late Michael Jackson, just a day after the anniversary of the King of Pop's death.
The soul legend took to the stage in the British capital's Hyde Park for the annual event, performing a full set of his hit tracks, including Signed, Sealed, Delivered I'm Yours and Isn't She Lovely, for the 50,000 strong crowd.
But it was his tribute to Jackson, who died on 25 June 2009, which really moved the gig-goers.
Wonder sang, "We love you Michael Jackson, we love your music Michael," to the tune of Master Blaster (Jammin') and played the harmonica to Jackson's hit track Human Nature.
The 60 year old was supported by Jamiroquai, James Morrison and Corinne Bailey Rae, who was full of praise for the veteran singer.
Bailey Rae says, "He has influenced me so much and is such an icon."