British Pop Stars Take That Have Been Honoured With The Key To London's O2 Arena After Playing A Milestone 21 Gigs At The Venue. 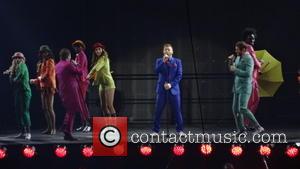 The record of 21 shows was set by Prince in 2007, and the Shine hitmakers have been feted for equalling the pop legend's feat after playing their 21st concert at the O2 on Monday night (15Jun15).

The framed accolade will be put on display backstage so artists will be able to view it as they walk out in front of the crowd.

The singers say of the honour, "We've loved each and every performance at The O2... We're delighted that so many people have had the chance to see us and this award is for each and every one of them. Thanks to everyone involved in making our performances what they are and of course to The O2 team for the key to the venue, it means a lot."