Taylor Swift has bought her own album, and she has admitted that is part of her tradition. 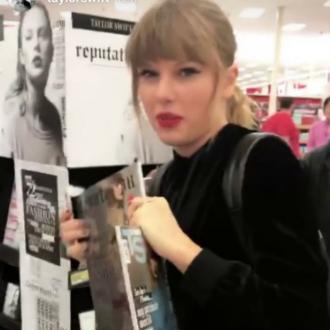 Taylor Swift has bought her own album.

The 27-year-old singer released her new LP titled 'Reputation' last week, and the star ventured to Target to meet and greet Nashville residents on Tuesday (14.11.17), but also to keep with tradition and get her hands on the compilation.

The blonde-haired beauty documented her surprise visit on her Instagram Story, which lasts on the site for 24 hours.

Speaking about her trip, she said: ''We always have this tradition of going to Target to go buy the album, and so we're gonna go do that.''

An onlooker named Chandler Turner revealed Taylor, who made the unexpected visit with her backing singes and dancers, was more than happy to stop and take snaps with her fans while in the store.

''It also stood out to me when she said it was a tradition to come to that Target and buy her album.

''Old Taylor is very much not dead.''

And the 'Shake It Off' hitmaker's supporters have taken to social media to share images of them with the star.

One social media user tweeted: ''SO MY MOM RANDOMLY MET TAYLOR SWIFT AT THE TARGET IN NASHVILLE WTF (sic).''