Tori Spelling is looking to mount her breast implants on the wall in her house after being told by a doctor that they need to be removed. 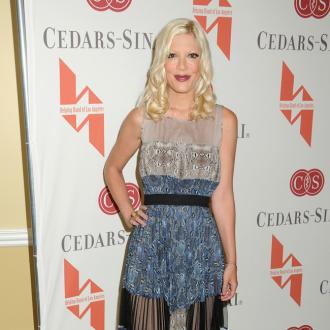 Tori Spelling wants her breast implants mounted on her wall.

The 41-year-old actress has become tired of her large boobs which she says should have been taken out 15 years ago, but wants to celebrate her busty look by having the silicone shapes removed and displayed in a glass dome in the house she shares with her husband and four children.

In a clip from her reality show 'True Tori', she is seen asking her beau, Dean McDermott: ''How are you going to feel about me having flaps there? Why don't we put them in a glass dome and I could put that on a wall next to my first bouquet from my marriage?''

The couple have faced a difficult 12 months after Dean cheated on the star with a 28-year-old woman in December 2013, so had been attending a therapy session to rescue their relationship when the conversation arose.

Tori - who has Liam, seven, Stella, six, Hattie, three, and Finn, two, with the actor - was later shown visiting a plastic surgeon in the episode, who revealed her breasts weren't in the best shape.

He explained: ''There's different degrees of the breast hardening. There's one, two, three, four. Yours is three, so it's pretty bad. It's almost as bad as it could be.''

While deliberating when to have the procedure to remove her breast implants, Dr. Ashkan Ghavami revealed she may end up with ''pancakes'' if she did not have surgery soon.

However, her busty chest is thought to be the least of her worries, with the couple - who wed in 2006 - believed to be on the verge of splitting due to Dean's adulterous behaviour.

Earlier this month, In Touch magazine quoted an insider who said: ''She's been pushed by some of her closest friends to end the marriage and is finally seeing that as a real option.''