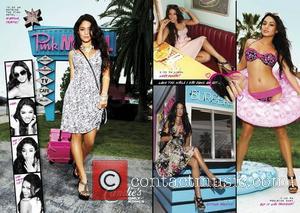 Picture: Hudgens unveiled as new Candie's spokesmodel Vanessa Hudgens has taken over from Britney Spears as the new face of clothing line Candie's. The High...

Vanessa Hudgens joked that British actor Michael Caine hit on her during the filming of their latest movie.
VANESSA HUDGENS, the American actress and former girlfriend of Zac Efron, says that MICHAEL CAINE hit on her whilst they filmed 'Journey 2: The Mysterious Island', reports the New York Daily News.When discussing her time on set with Caine, the 22-year-old said, "Not only is he amazingly, stupidly talented, but he still kind of hits on me. All the time", before adding, "If it was anybody else, I'd be like ..Who the hell do you think you are?.. But because it's Michael Caine, I'm like, Sock it to me more, baby, come on!" Hudgens later explained that her character is required to look like she's 'sweating' in several scenes and noted that Caine was happy to lend a helping hand, she said, "I can't tell you how much time is spent putting oil on my chest.Just to look like I'm sweating. But your boobs don't really sweat, cleavage doesn't sweat. So it's kind of funny. But Michael's always telling the makeup artists that he'll take over and do it".
'Journey 2: The Mysterious Island' has been directed by BRAD PEYTON and follows the story of a man on a mission to find his grandfather, who is allegedly missing on a mythical island. The film also stars Dwayne Johnson and Kristin Davis and will be released on 23rd September 2011.