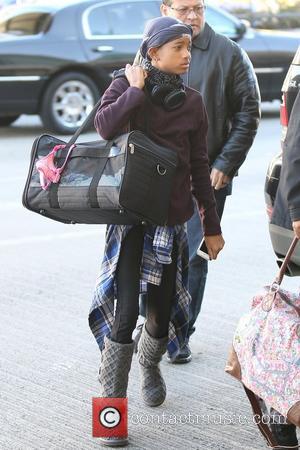 Picture: Willow Smith carrying a small dog in a carrier, as she arrives at LAX airport with her brother and security team to catch a Delta...

Young star Willow Smith dropped out of a planned movie remake of beloved musical Annie because she wanted to focus on enjoying her childhood.

The Whip My Hair hitmaker signed up to play little orphan Annie in 2011, when she was just 10 years old, but the pre-teen pulled out of the project last week (31Jan13) amid reports she had "outgrown the role".

However, her father Will Smith has now revealed the real reason behind the 12 year old's decision to step down - despite his efforts to keep her on board for the film, which he is producing with his rapper pal Jay Z.

The I Am Legend actor explains, "In the past 18 months, I have spent a lot of time focusing on the emotional aspect of my life and my family. In 2010, in one year, our family had the Karate Kid (starring his son Jaden), we had Whip my Hair, we had Hawthorne (his wife Jada Pinkett Smith's medical drama series), and at the end of the year, we did the Nobel Concert when Barack Obama won his Nobel Peace Prize. That wears you out.

"Willow was supposed to be doing Annie; we got Jay Z to do the movie, got the studio to come in and Willow had such a difficult time on tour with Whip My Hair and she said, 'You know Daddy, I don't think so...' and I said, 'Baby, hold up!' I said, 'No, no, no, listen, you'll be in New York with all of your friends and Beyonce (Jay Z's wife) will be there. You will be singing and dancing,' and she looked at me and said, 'Daddy, I have a better idea. How about I just be 12?'

"I'm really learning through Willow the necessity that we have to snap ourselves back and refocus on the emotional needs of the people that we love. Someone's emotional needs can be very very different from your dreams and what you think they should be doing and where they are supposed to be."

A replacement for the lead role has yet to be announced, but shooting is scheduled to begin in the autumn (13) with a slated 2014 release date.

Friends With Benefits filmmaker Will Gluck will direct.