Willow Smith Confirmed For Annie With Jay-z As Producer 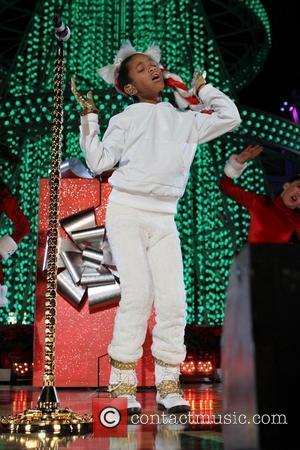 Willow Smith – Willow Smith, the 10-year-old US pop sensation and daughter of Will Smith, has been confirmed to star in a remake of the classic musical ‘Annie’, reports Billboard.com. Will, his wife Jada Pinkett-Smith and their partners Overbrook Entertainment have formed a joint partnership with music mogul JAY-Z, who will produce the project.
42-year-old Will and wife Jada have a history of joint ventures with JAY-Z, the trio invested in the beauty line ‘Carol’s Daughter’ and later joined forces to co-produce the Broadway play ‘Fela!’ Willow Smith has since signed to the rapper’s ROC NATION label and released the phenomenally successful single ‘Whip My Hair’ last year. ‘Annie’ is still in the development stages but it is understood that the new project will closely echo the original story, with Willow playing a young girl living in an orphanage in downtown New York. It has been reported that JAY-Z will provide the music for the movie and in astatement the 41-year-old said, “The Overbrook Entertainment family and I have a unified vision. We've already produced a Tony Award-winning play and we're developing a true superstar in Willow. This venture into film development and production is a perfect next step with teams that are accomplished, creative and innovative”.
The original movie starred Aileen Quinn as ‘Annie’ and the legendary British actor Albert Finney as ‘Oliver Warbucks’, a billionaire businessman who has Annie stay over at his mansion to improve his public image.