Woody Allen: 'Amy Schumer Is A Better Comic Than Me'

Veteran Filmmaker Woody Allen Has Praised Funnywoman Amy Schumer By Suggesting Her Comedic Skills Are Much Better Than His. 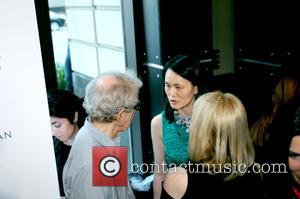 The director is the centre of a joke in Schumer's new blockbuster comedy Trainwreck, in which her character mentions his 1979 film Manhattan.

Schumer and her love interest, played by Bill Hader, return to the New York City bench underneath the 59th Street Bridge where Allen and Diane Keaton filmed an iconic scene, when Schumer says, "I think this is where Woody met Soon-Yi," referencing Allen's wife, Soon-Yi Previn.

When asked during a recent screening for his new film Irrational Man if he's seen the film, Allen admitted he hadn't but is a huge fan of her work and comedic skills.

He told Vulture.com, "I didn't know. This is the first time I'm hearing it... You know, being a comedian myself, I have a tremendous admiration and respect for all these people. I used to think that, 'Oh, I was so great, and there's so many comedians, and they're second-rate.'

"And then I watched them on cable television, and I thought, 'My God, I'm nowhere near as good as any of these people!' I have a tremendous respect for all of them; it's amazing how good they are and how much better than I was all of them are, including her."

Allen hit headlines in 1992 when he had an affair with his then-girlfriend Mia Farrow's adopted daughter, Previn, who is 34 years his junior.