By Shaun Kelly in Music Reviews on 01 February 2012

Once described as the best live act in the UK by the Guardian, the band who sound tracked the opening clips of many people's favourite gangster drama return with their ninth studio album, Shoplifting 4 Jesus. Alabama 3 are back on the scene and this album demands your attention as a listener. 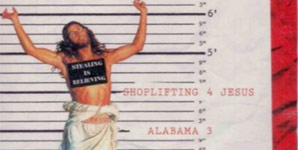 Alabama 3 - Interview: Contact music spoke to Jake Black Contact music spoke to Jake Black (aka The Very Reverend Dr D Wayne Love) of Alabama 3. So How did Alabama 3 Start? I met Larry at a acid house party in Peckham and I decided we were going to be the first band to put Hank Williams on drum beats and acid cracks which we have done quite successfully. Larry went to university with A mountain of love (a member of the band) and the spirit (the piano and keyboard player) used to live with me, we just started to use people we knew and added and added until now.

So how many members do you have in total now? Well there is 8 of us on stage but you know there is a lot of people who are dead important off the stage people making our sound great…well when they are doing their job, all the management so really we have about 16-17 people involved. When we go on the road there is usually about 14 for us. We are having to get the only 16 birth bus in the UK but the beds are only like 5' 2". So I don't think we will be getting to many good nights sleep, but it will all be ok as it's like going away on holiday for us playing tours that is the part we all enjoy the most. We just really happen to like playing live, we didn't make any records for years we just used to go out and do gig after gig after gig. It took us, about 3 years before we started to play in London. You have a tour over the UK planned for people who haven't been to watch you yet what can they expect from your live show?

It's a proper medicine show, it's like a pantomime, it's the full lot!

If you were to have some one to come on stage and join you who would it be?

Alabama 3 - Power In The Blood