Model And Singer Amber Rose Has Put Kim Kardashian On Notice - Kanye West Is Still Writing Songs About Her. 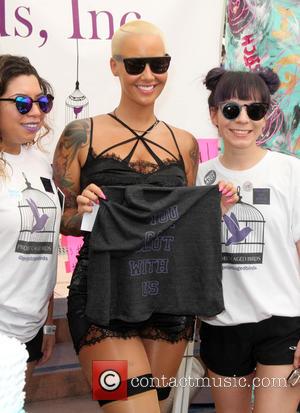 Rose dated Kanye as he was really breaking out as a rap superstar, and although he has been unkind to his ex in some of his lyrics, she insists he still treasures their time together.

In fact, even though he's happily married to Kardashian, who is expecting the couple's second child, Amber claims he's still writing cryptic lyrics about special moments he shared with her.

"I'll hear songs and I'm like, 'Oh, he said that about me'," she tells GQ magazine. "No one knows what he's talking about but me and him. People can't decipher.

"They'll be like, 'That's a cool song', and I'm like, 'That happened to us when we were together'. Obviously, I know he's talking to me through music. I was a fan."

But Rose, who turned 32 on Wednesday (21Oct15), insists he has no ill will towards fellow birthday girl Mrs. West, insisting comments she previously made about her ex's wife were blown out of proportion.

"I said to Khloe (Kardashian), 'Your sister Kylie has a career because your other sister (Kim) made a sex tape and put the whole family on'," she explains. "I think it's f**king awesome that she did a sex tape and made millions of dollars for her family. But let's not forget where we came from. Because I didn't.

"She (Kim) probably had a f**king blast (making the sex tape with ex-boyfriend Ray J). And guess what? At the time she was in love with that guy."

West fell for Rose after spotting her in Ludacris' What Them Girls Like video and the couple dated from 2008 to 2010. Kanye and Kim exchanged vows in May, 2014. After splitting from West, Amber went on to date and wed another rapper, Wiz Khalifa. They split last year (14).