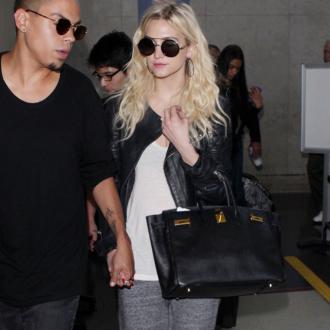 Ashlee Simpson and Evan Ross will reportedly be getting married at Diana Ross' mansion.

The 29-year-old singer and 'The Hunger Games: Mockingjay' actor - who is the son of the 'I'm Coming Out' hitmaker - are said to be planning to tie the knot at the home in West Hollywood, California on Labour Day, which falls on the first Monday in September, according to the New York Post newspaper's PageSix.

Evan, 25, popped the question to Ashlee - who is the younger sister of Jessica Simpson - in January after six months of dating, but admitted previously that he was so smitten with the star he could have proposed much sooner.

He also admitted that his mother Diana, 70, would be helping him and his fiancée plan their nuptials.

He said: ''She's involved in every part of our wedding [and] engagement party.''

The news comes months after Evan confessed that he was so desperate to be married to Ashlee - who has five-year-old son Bronx from her marriage to Fall Out Boy star Pete Wentz - that he was considering eloping.

He said: ''Honestly, we could go and get married right now, wherever. We just want to be married. We're in love.''