Ashton Kutcher's recent lack of tweets has reportedly added to speculation he could have split up from wife of six years Demi Moore. 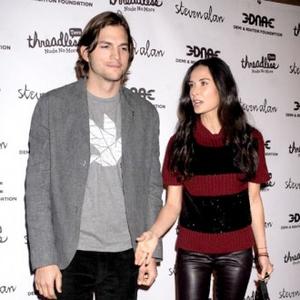 Ashton Kutcher's recent lack of tweets has reportedly fuelled speculation he may have split from Demi Moore.

Recent rumours have suggested the 'Two and a Half Men' actor and the 'Charlie's Angels' actress - who have been married since September 2005 - have gone their separate ways after claims he had a liaison with another woman, according to RadarOnline.

There has been no official statement from the couple's representatives about the status of their relationship, but Ashton's latest twitter post earlier today (29.09.11) hinted the allegations are false.

The 33-year-old star tweeted a link, without a comment, to his Spotify account on which he was playing Public Enemy song 'Don't Believe The Hype'.

She wrote: "When we are offended at any man's fault, turn to yourself & study your own failings. Then you will forget your anger."