Benedict Cumberbatch was in a fighting mood on Top Gear. 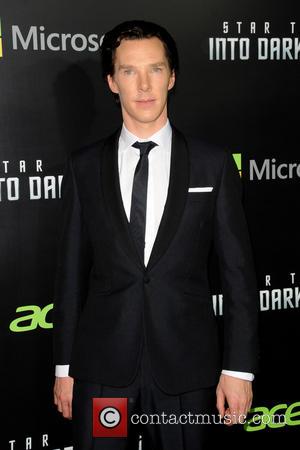 Benedict Cumberbatch has only gone and done what millions of Britons have longed to do for years. Nope, it's not star in a Star Trek reboot. It's not play Sherlock Holmes. It is, of course, give Jeremy Clarkson a great big punch to the gut.

Ok, so he didn't quite do that, though the British actor gave the presenter a stage combat demonstration during an interview for Top Gear, which aired on BBC Two last night (July 14, 2013).

When Cumberbatch joked how he couldn't do Clarkson's job - after smashing up his Mini - the presenter responding by admitting he could never be an actor, "I've no idea how to fly a spaceship or punch anyone. Or act."

"That can be taught," said Cumberbatch, who explained that punches need to be "set.a bit more for the cameras." He then encouraged Clarkson to join him for a mini acting-class, joking, "I'll give and you receive. I like being the dominant one."

A worried Clarkson told the audience of middle aged car enthusiasts that he'd probably end up bleeding on them - cue laughter all round.

British star Cumberbatch - who played the villain in JJ Abrams' Star Trek sequel - will next to seen in the WikiLeaks movie The Fifth Estate, Peter Jackson's The Hobbit: Desolation of Smaug and Steve McQueen's hugely anticipated 12 Years A Slave.

BBC's Top Gear is currently in its twentieth season. It remains of one of the most watched shows on terrestrial television. Woah! Jeremy Clarkson Got More Than He Bargained For From Benedict Cumberbatch