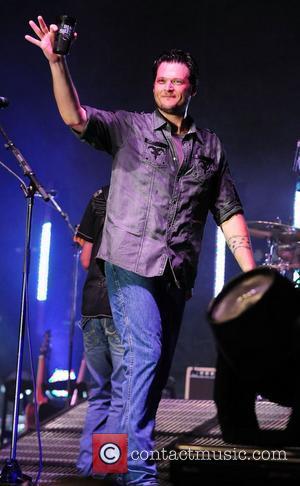 Country couple Blake Shelton and Miranda Lambert had an emotional bonding experience as they wrote a tribute song in memory of the Honey Bee singer's late brother.
Shelton was just 14 when his older brother Richie was killed in a car accident at the age of 24. He has seldom talked at length about the tragedy which rocked his family, but Shelton opened up to his new wife Lambert after catching part of a TV documentary about his life while on tour.
He tells the Associated Press, "Miranda never had a chance to meet my brother. I was just a teenager when that happened. So I was telling her about him, what he was like, and we just ended up like we do sometimes, writing a song."
But the artists found themselves overwhelmed by emotion as they struggled to pen the lyrics to Over You.
Lambert says, "We both actually cried while writing the song. That's the only time I've ever gotten that emotional writing a song, and him, too. So, I think the initial emotion came out right that day, and I think you hear it in the lyrics...
"It was really a great moment between us. It was like we moved to a deeper level, not just in our relationship, but also, we respect each other as artists, and being able to write something that personal with each other was really cool."
Lambert is preparing to release the track as the second single from her latest album, Four the Record, and Shelton is proud to have had a part in writing such a powerful tune.
He adds, "That to me, that's what I'm supposed to do as a country artist, a country songwriter, is take a real-life situation that is emotional and make it into music. There's no way I could have performed that song every night. So I'm honoured Miranda put it on her record."