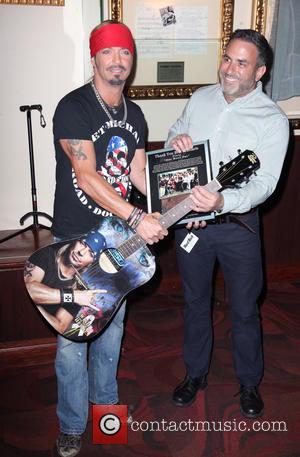 Rocker BRET MICHAELS helped to raise thousands to aid the ongoing tornado recovery effort in a small village in Nebraska on Sunday (24Aug14) by headlining a charity show for locals.

The Poison star was inspired to take action after visiting Pilger in late June (14) to help with the clean-up effort, days after twin tornadoes ripped through the area, killing two people and destroying over half of the homes and other buildings across the neighbourhood.

He vowed to return to stage a fundraising concert for victims and he made good on his promise this weekend as he hit the stage in the nearby city of Norfolk for the sold out Rock N' Relief event.

During the gig, Michaels presented representatives from local community groups with three cheques, amounting to more than $30,000 (£17,647), via his Life Rocks Foundation to help cover the costs for the continued recovery project.