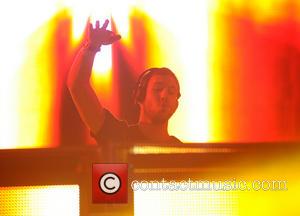 Dj Calvin Harris has ended his brief fling with Russian supermodel Anne Vyalitsyna and embarked on a new romance with British singer Rita Ora, according to a U.S. report.

The We Found Love hitmaker began dating rocker Adam Levine's ex-girlfriend, nicknamed Anne V, in February (13) but they recently parted ways and it appears Harris has wasted no time in moving on - the Scot was spotted getting close to How We Do beauty Ora in Las Vegas on Saturday (04May13) as he performed at the MGM Grand's new Hakkasan venue.

A source tells the New York Post's Page Six column, "(Ora) was in the Dj booth during his entire performance and the two were seen getting really cozy and kissing."

Ora previously dated Kim Kardashian's younger brother Rob, but they went through a bitter break-up in December (12) after the reality Tv star accused her of cheating on him.

There have also been recent reports Harris is dating Ellie Goulding after the couple filmed an intimate video for its I Need Your Love single - home video footage of the pair in the promo features scenes of Harris and Goulding kissing and cuddling in bed.