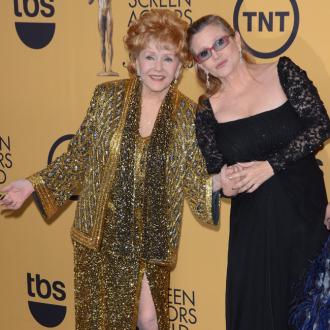 Carrie Fisher mocked her mother Debbie Reynolds as she presented her with a Lifetime Achievement prize at the Screen Actors Guild awards last night (25.01.15).

The 'Star Wars' actress gave a humorous introduction to her 82-year-old mom and even referenced her infamous feud with Dame Elizabeth Taylor, who had an affair with her first husband, Carrie's father Eddie Fisher.

Carrie said: ''She's been more than a mother to me, not much, but definitely more. She is a movie star, recording artist, television actor, nightclub entertainer, Broadway performer and co-founder of the Thalians, a group that has raised more than $30 million for mental health. Well, mental health-related causes, and $4.5 million of that money is allocated just for me...

''This is an extraordinarily kind, gifted, and funny woman who would give you the shirt off her back if Vivien Leigh hadn't once worn it in 'Gone With the Wind'.

''Prior to our original introduction, Debbie Reynolds was already the voluptuous, fertile half of America's sweethearts, Elizabeth Taylor's matron-of-honour.''

A montage of the three-times-married actress' 66-year career was then played before Debbie - who also has a son, Todd, with her first husband - took to the podium and returned the ribbing she had been given from her famous daughter.

As well as thanking the Screen Actors Guild for the honour, she said: ''My favourite picture, well I did a few, was 'Singin' in the Rain'.

''Of course I had a wonderful hairdo in that picture. Some of you may not remember this but I had a bun. At the back of my head I had a big bun, an ugly bun.

''I'd warned my daughter Carrie who'd just gotten a part in a picture, Princess Leia in 'Star Wars' and I said 'Carrie be careful of any weird hairdos.' So luckily, George [Lucas] gave her two buns. Thank you, George.''

The 'Behind the Candelabra' star then referenced her 1964 musical 'The Unsinkable Molly Brown' to close her speech.

She said: ''In that film, I got to sing a wonderful song called 'I Ain't Down Yet.' Well, I ain't. Thank you all so much for this wonderful award.''