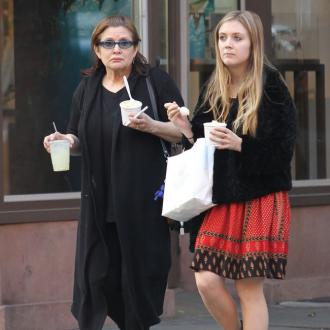 The 57-year-old actress reprises her role as Princess Leia in the upcoming latest instalment of the sci-fi series, which is currently being filmed at Pinewood Studios in Buckinghamshire, southeast England.

And although her daughter Billie Lourd is a relative unknown, director J.J. Abrams is said to have chosen her to play a young version of her mother's character because of their visual similarities.

A source told The Sun newspaper: ''Billie flew into the UK to join her mother earlier this month.

''She will even have her hair tied up in Princess Leia-style buns. She's an aspiring actress and singer so she grabbed the opportunity with both hands.

''Carrie backed the move as she wanted somebody in her family to play her most famous role.''

Lourd - whose father is entertainment agent Bryan Lourd - will feature in flashback scenes as a younger version of Princess Leia, hero Luke Skywalker's sister, whom her mother portrayed in the first three 'Star Wars' films.

Meanwhile, Abrams has also created walk-on parts for his father Gerald and father-in law James H. McGrath Jr., who both appeared in 'Star Trek' under his direction.