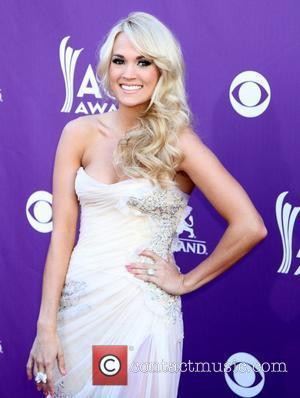 Carrie Underwood appeared to be the fashion critic's undisputed favorite at the Country Music Awards in Las Vegas on Sunday (April 1, 2012). The 29-year-old wowed fans on the red-carpet at the Mgm Grand Garden Arena with a low-cut ivory couture gown by Abed Mahfouz.
The gown featured elegant silver detailing with a thigh-high slit that drew comparisons to Angelina Jolie's Versace dress at the Oscars. On that occasion, Brad Pitt's partner was ridiculed, though Underwood was praised for pulling off the tricky style of dress. The country star combined the outfit with shoes by Oscar de la Rente and jewellery by Johnathon Arndt. Underwood kicked off the awards ceremony with a blast of rock and roll, changing into a black mini-dress and blasting out her single 'Good Girl'. Though it was fashion success for Underwood, she didn't manage to take home any awards on the night, with Taylor Swift scooping the Entertainer of the Year gong for the second successive year. Other winners included Blake Shelton, Miranda Lambert and Lady Antebellum.
Reba McEntire hosted the annual event, with the Zac Brown Band headlining the nearby Acm Fan Jam at the Mandalay Bay resort.