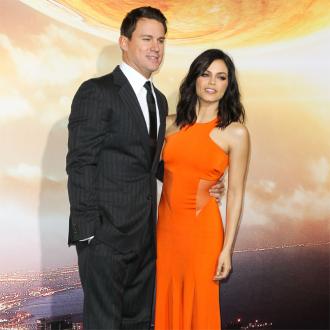 The 35-year-old actor has revealed Jenna, 34, told him ''let's do it'' after hearing that 'Terminator Genisys' actress Emilia was attracted to them both but he's still waiting for the proposed menage a trois to happen.

Channing joked: ''I'm just looking at my wife for reaction. Like, 'I don't know. I don't know what's happening. Is this happening? I think this might be happening.' Jenna's a pro. She's just like, 'Oh yeah, let's do it!' And then it never happens.''

The 'Magic Mike XXL' star went on to confess that he's open to the idea of putting on ''some loin cloths and some swords'' to ''make it happen'' with Emilia - who plays Daenerys Targaryen in 'Game Of Thrones'.

Speaking on Howard Stern's SiriusXM radio show, Channing said: ''What guy in their right mind (wouldn't be into it)? I would put on some loin cloths and some swords or whatever to make it happen. Look, I'll go find a dragon if you guys really want me to. Like, I'll figure it out.''

Emilia previously admitted she immediately wanted ''something sexual'' with the couple after meeting them at a Golden Globes after-party earlier this year.

Emilia, 28, said: ''I was at a Golden Globes after-party and Channing f***ing Tatum came up to me, and his stunning (girl), Jenna Dewan. And they said, 'We call each other 'moon of my life' and 'my sun and stars' and all that.' And I was like, 'I cannot contain this. Please, can we all have something sexual together? You're both beautiful, even just a hug.' ''