Charlie Sheen has teased a plan to hunt for the legendary Loch Ness monster after he posted a picture of himself wearing a bronze battle helmet with a message alluding to the mythical beast. 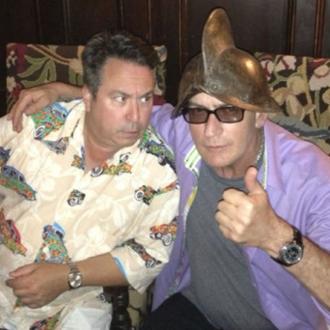 Charlie Sheen teases a hunt for the Loch Ness monster.

The 'Anger Management' star posted a picture on his Twitter account which showed him wearing a bronze battle helmet as he hinted at a plan to search for the mythical beast found in Scotland.

Fans offered their support to actor on the social networking site as they thanked him for planning the mission.

One fan wrote: ''It's about time Nessie was found!! Thanks Charlie. (sic)''

Charlie was in an upbeat mood despite recent reports he was pushing for his former wife Brooke Mueller to have her child support reduced while their children are in the care of his other ex-wife Denise Richards.

A source previously said: ''It's a child support modification request. Charlie doesn't want to completely cut her off, and doesn't want to kick her when she is down. However, he doesn't think it's fair that he should pay the entire $55,000.''