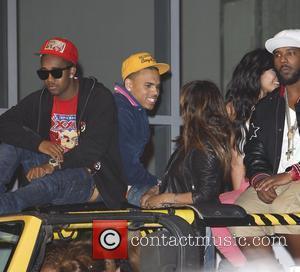 Picture: Chris Brown and Melody Thornton on the set of a music video in Hollywood Los Angeles, California - 19.08.09

Disgraced R&B star Chris Brown's comeback has been dealt another blow - hitmaker Timbaland has cut him from his new song.
The Kiss Kiss singer split the music world earlier this year (Jun09) when he pleaded guilty to beating up ex-girlfriend Rihanna during a fight on the eve of the Grammy Awards in February (09) - and some peers have refused to work with the shamed star as a result of his actions.
Timbaland insists he's not one - but he has cut Brown's vocals from new tune The One I Love.
And rapper D.O.E., who does appear on the track, tells TMZ.com the title had to be changed from Maniac because of the Brown controversy.
Timbaland's manager, Marcus Spence, tells the website the decision to cut Brown from the track "was a creative decision for both parties."