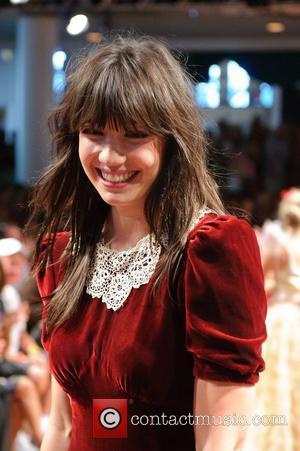 Daisy Lowe 's cover for the September issue of Playboy magazine has surfaced online, featuring the British model in Pvc underwear - covered in daisies. The Londoner travelled to Hugh Hefner's Los Angeles mansion for the hugely anticipated shoot, reports the UK's Daily Telegraph.
Several other shots from the spread have also found their way online, showing Daisy sunbathing, smoking cigarettes and skinny dipping in a pool. The magazine's tagline reads, "Home Alone with Daisy Lowe: The UK Model and Next Big Thing". The images represent Lowe's first shoot for the magazine, but she posed nude for a Pirelli calendar photographed by the controversial Terry Richardson in 2010. Daisy, the daughter of Pearl Lowe and Bush singer Gavin Rossdale, follows in the footsteps of British model Elizabeth Jagger, who graced the June cover of the magazine. Supermodel turned actress Lily Cole has previously posed for the French version of the men's mag.
Daisy is currently dating the British actor Matt Smith, after meeting at the Coachella Valley Music and Arts Festival. In 2009, she featured in 'The First Days of Spring', a film accompaniment to the second album by British indie band Noah and the Whale. She recently appeared in the video to Miles Kane's 'Come Closer'.