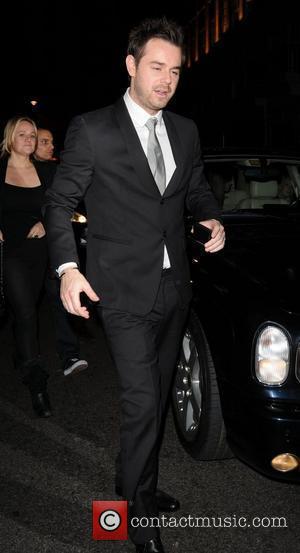 British actor Danny Dyer has spoken out in defence of his THE BUSINESS co-star Tamer Hassan following his bust-up with Vinnie Jones - insisting the former soccer player deserved "a slap" for appearing on a reality show.
The two stars clashed at the Chateau Marmont Hotel in Los Angeles earlier this month (Apr10), following an alleged long-running feud between the pair.
Jones, famous for his hardman roles, reportedly landed a punch on fellow tough-guy Hassan, but was spotted the following day sporting injuries on his face and neck.
Now Dyer, a close pal of Hassan's since they starred as gangsters in the 2005 U.K. film, has revealed the fight came after a previous scuffle on New Year's Eve (31Dec09).
And the actor insists Hassan had every right to lash out at Jones - mocking him for failing to win British reality show Celebrity Big Brother in January (10).
In his column for Zoo magazine, he writes, "I cracked up (laughed) when I saw that stuff in the papers about Tamer Hassan getting into a scrap with Vinnie Jones. Tamer's in L.A. and I've been in Norway, so I haven't talked to him about it yet, but I can't wait to hear all the details.
"It's a case of a few beers too many, and all that alpha male b**locks. I know they had a bit of a falling out on New Year's Eve, when Tamer gave Vinnie a slap. They made a film together in Hungary last year, but I wouldn't say they're best mates.
"I'm in Tamer's camp all day long. He'd eat Vinnie alive if it came to it, the two-bob c**t. He's really clutching at straws. The mug (idiot) finished behind (British singer) Dane Bowers in Celebrity Big Brother, and now he thinks people give a f**k about him.
"Thank God Tamer gave him a slap - he was clearly due one!"