David Beckham has taken up boxing to keep fit and shared a video of his training regime on his MyEye page. 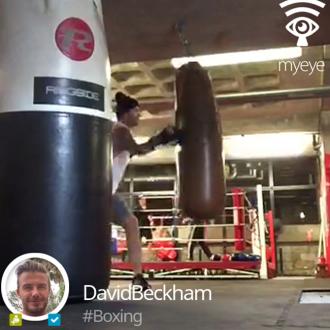 David Beckham has taken up boxing.

The retired soccer superstar - who recently branched out into acting with a cameo in pal Guy Ritchie's movie 'The Man From U.N.C.L.E' - has found a new way to keep fit and has been sharing his sessions on live streaming app MyEye.

A new clip on the app shows 40-year-old David - who also has a small role in Ritchie's 'Knights of the Roundtable: King Arthur' - hitting a punching bag and doing sit-ups.

David recently invested in MyEye, which is not linked to any specific social network and stores and broadcasts content for 72 hours before it expires.

Speaking previously about his involvement, he said: ''I'm always looking to back and support British businesses that have the ability and vision to do something truly transformational on the global stage, and I believe that MyEye has the potential to change the way people interact through social media.

''I have been cautious about the partners I work with in the digital world and I've been very impressed with [MyEye founders] Paul Kavanagh, Mark Betteridge and Lee Musgrave. They have a great track record of building successful businesses and I'm excited to collaborate with them going forward.''

Other stars who use the app include Liv Tyler, Natalie Imbruglia, Nick Grimshaw, Gary and Phil Neville, Paris Hilton and Nicole Scherzinger.

MyEye is available now to download for free from the Apple Store and Google Play store. Go to www.myeye.world for more information.