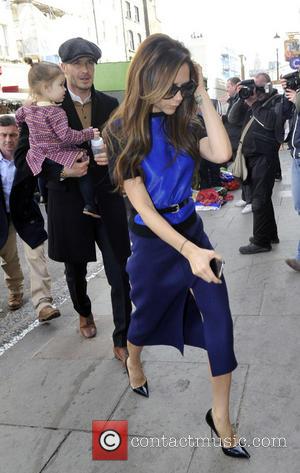 Could a fifth Beckham baby be on the way? It's been just 18 months since Victoria and David Beckham welcomed their first daughter Harper into the brood, though according to insiders at London Fashion Week, Victoria has been openly discussing the possibility of having a fifth Beckham baby!

The fashion designer and football star also have three sons, Brooklyn, 13, Romeo, 10, and Cruz, 7, though it appears David's recent move to Paris Saint-Germain has paved the way for another baby.  A source told Closer magazine: "(Victoria) was making cheeky comments to everyone at Fashion Week who congratulated her about David's Paris move and asked her if she's planning on opening a Paris boutique.She quipped, 'Maybe - and maybe we'll get a Paris baby, too!' She's besotted with Harper and says she'd love another girl." The timing certainly works, with Victoria and David now settled in Europe for the foreseeable future, though the 37-year-old sports star is thought to be reluctant to have another baby. An insider explained: "David's been doing most of the work with the boys over the past few weeks, while Victoria prepared for New York Fashion Week, and although he loves every moment he spends with them, he'd like some time to unwind. He's not sure he can handle another one in nappies and sleepless nights."

Speaking on Jonathan Ross' ITV1 chat show last year, David declared, "We might have one more or two more, you never know. We're not thinking about it yet, but if it happens, great." Could A Fifth Beckham Baby Be On The Way?