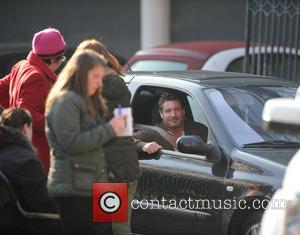 Picture: Dean Gaffney - Actor Dean Gaffney wears a seat belt as he drives away from the Coronation Street set in Manchester. Dean now sports a...

British actor Dean Gaffney has been fined for speeding over an incident which occurred just weeks before he was involved in a near-fatal car crash.

The former EastEnders star pleaded guilty to a speeding charge relating to an incident in Wales in November (12), less than two months before he had to be cut free from a car wreck in January (13).

The star, who was caught on camera exceeding a speed limit in Newport, entered his plea via mail and a magistrate handed him a fine and penalty points on his driving licence during a hearing at Cwmbran Magistrates' Court on Thursday (25Jul13).

Gaffney spent several days in hospital after the terrifying crash in Derby, England, but has since made a full recovery.