Demi Lovato has got a new pooch named Batman, three weeks after her dog Buddy was killed by coyotes in her backyard. 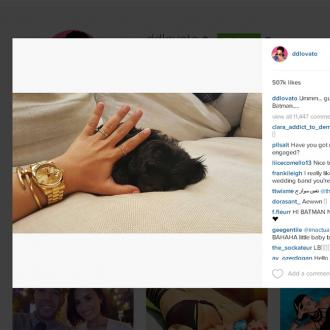 Demi Lovato has got a new puppy named Batman.

The 'Cool For The Summer' singer was gifted the fluffy pooch for her 23rd birthday on Thursday (20.08.15) and introduced the canine on her Instagram with a photo of the mutt alongside her hand to show his miniature size.

The new pet comes just three weeks after her dog Buddy, which was given to her by her 34-year-old boyfriend Wilmer Valderrama last December, was mauled to death by coyotes in the backyard of her Californian mansion, according to gossip website TMZ.

And following the incident, the star - who is gearing up to release her fifth studio album - posted an emotional tribute saying she felt ''blessed'' to have had the pooch in her life.

She wrote on Twitter: ''We are absolutely heartbroken to be writing this but Wilmer and I are devastated to inform you that we lost our little angel Buddy last Sunday. He was taken from us way too soon in a tragic accident and though I will never know why this had to happen, I do know that God only puts us through situations that we can handle so with that, together we our staying strong.

''We have incredible people around us and so much love and support which is holding us up in this time of need. Buddy was loved by so many people and as small as he was, he made a huge impact in our lives. He truly was human in a way and we were so blessed to have him in our lives.

''We will never forget our baby boy Buddy and his gentle loving spirit will live on in our hearts forever. RIP my tiniest little nightingale, Buddy...''