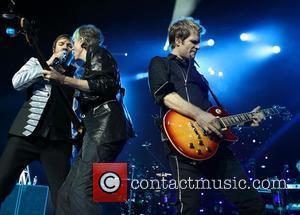 A special Olympic concert will take place in Hyde Park today, to celebrate the start of the 2012 Olympics. The show will coincide with Danny Boyle's elaborate opening ceremony, which will be shown on big screens in Hyde Park, for concert-goers to enjoy. Four bands have been chosen to play at the concert; each one representing a different country in Great Britain. For England, Duran Duran will perform, whilst Paolo Nutini represents Scotland, Snow Patrol will be flying the flag for Northern Ireland and Stereophonics are there for Wales.

Gary Lightbody, frontman of Snow Patrol joked that playing at the concert will be his best chance of representing his country at the Olympics. "It's the only thing I'll ever represent Northern Ireland at. My 100 metre sprinting days are long past me." Then, on a more serious note, he added "We were asked to represent our country, we're never going to say no to that. The world is looking in on our nations and you've got to stand up for that." Paolo Nutini will kick off the show in Hyde Park at 18:45 and told BBC News that he's proud to be representing his country, saying "Being asked to be a part of any big event in a setting like Hyde Park is always an honour and to go fly the flag for your country makes it even sweeter."

Duran Duran have been something of a controversial choice to represent England with many commentators arguing that they have long since had their day. The band reached the peak of their popularity in the 1980s, though they achieved a brief resurgence of interest in 2010, when they released their 13th studio album All You Need Is Now, produced by Mark Ronson.