Ed Sheraan unveiled his wax model at Madame Tussauds in New York City and was pleased with the results, especially the bulge in the trouser department. 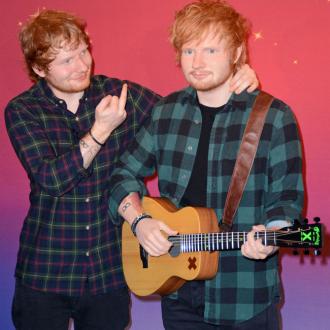 Ed Sheeran is very happy that his new wax model has ''got a bulge'' in the trouser area.

The 24-year-old musician unveiled his doppelgänger at Madame Tussauds Time Square in New York City on Thursday (28.05.2015) and was most impressed that the creators chose to make the statue well endowed.

Taking to Twitter, he said:''Met my waxwork at Madame Tussaud, he didn't say much but he's got a bulge so it's all good. (sic)''

To create his double, Ed had to wear skin tight shorts and a vest and be measured and prodded for three hours to ensure the finished result was an exact double of the singer.

Before it was revealed to the world, the 'Thinking Out Loud' hitmaker anticipated that his parents would find the wax work, which can be seen wearing a trademark chequered shirt and holding a guitar, strange.

Ed posed for numerous photos with the model, flicking it the bird at one, and he took his own selfie for his personal photo collection.