Ed Sheeran performed at Ronan Keating's big day and was joined on stage by Boyzone band members as they serenaded guests, including Westlife's Brian McFadden and Australian beauty Dannii Minogue. 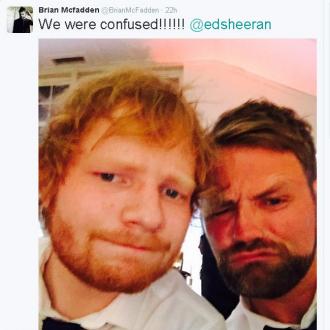 The 'Thinking Out Loud' hitmaker performed solo at the newlyweds' function at golf club Archerfield House in East Lothian, Scotland on Monday (17.08.15) and was later joined by Ronan's Boyzone bandmates, Keith Duffy, Mikey Graham and Shane Lynch for a special song.

A source told Irish website Goss.ie: ''Ed appeared out of nowhere, everyone was so surprised. He was such a nice guy.''

The star-studded ceremony also attracted Westlife's Brian McFadden, who couldn't believe the international superstar was at his mate and boyband rival's big day.

Alongside a selfie of Ed and himself he wrote: ''We were confused!!!!!! @edsheeran

Brian has been friends with Ronan for many years as their bands were both managed by former 'The X Factor' judge Louis Walsh.

It's not the first time the 24-year-old singer has performed romantic gestures.

Last month he helped make Rixton's Jake Roche's proposal to Little Mix's Jesy Nelson intimate as he pulled them up on stage prior to a concert in Manchester.