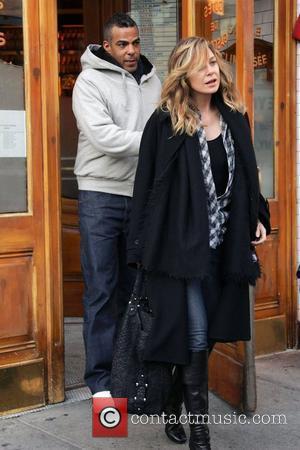 GREY'S ANATOMY star Ellen Pompeo is convinced her fiance's drug-dealing past is behind him as she prepares to marry the Los Angeles music producer. Pompeo has been dating Chris Ivery since 2003 and the couple got engaged in November 2006. Court records obtained by American magazine Star show Ivery has at least 13 criminal convictions in Massachusetts and has served three jail sentences. In 1987, at the age of 19, Ivery was arrested for possession of cocaine and cannabis with intent to supply. He was fined and given probation after being convicted of both counts in 1990. After missing three probation hearings, Ivery was sentenced to three months in jail. Later in 1990, Ivery was sent back to jail after being arrested for "trafficking in cocaine" and for cocaine possession. Following eight further convictions, Ivery was sentenced to 14 months in a Pennsylvania federal prison and was released in June 1995. Three years later (98), Ivery admitted planning to bring a 10 pound cannabis haul back to Boston, Massachusetts after being arrested accepting the package in Arizona. He was given a two year suspended sentence and sentenced to six months house arrest. But Pompeo insists Ivery's past is no surprise to her and has vowed to stand by her man. Her spokesperson tells Star, "Ellen knows all about that stuff. It was a long time ago."